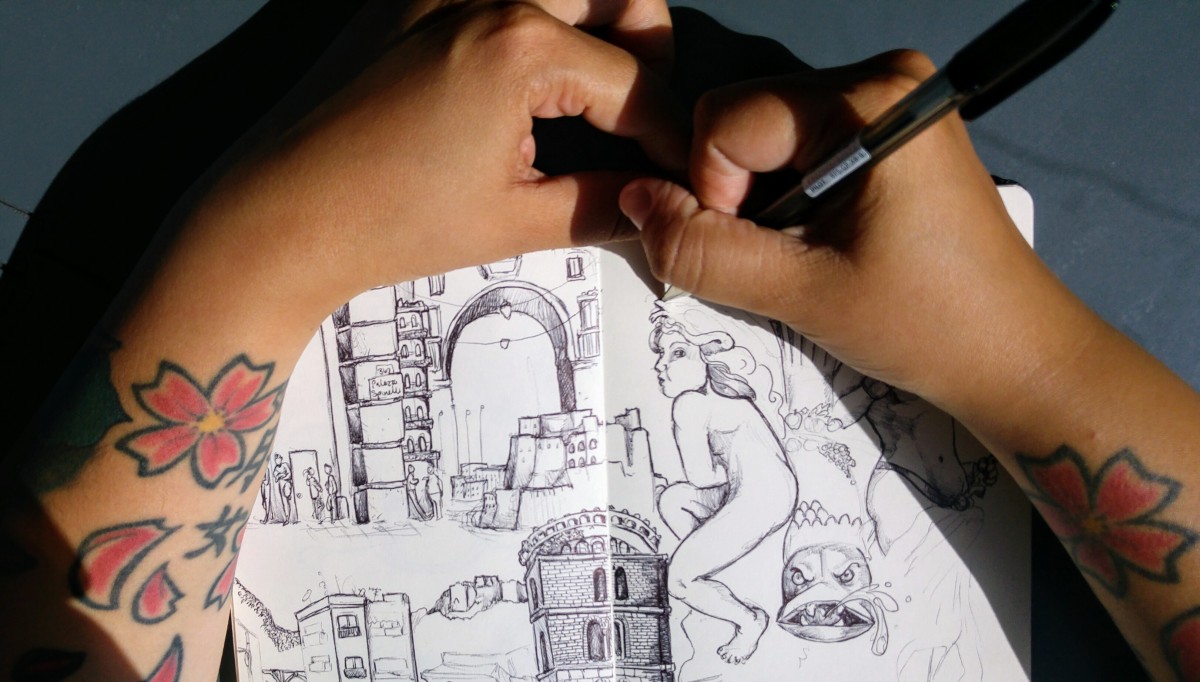 “To be away from home and yet to feel oneself everywhere at home; to see the world, to be at the centre of the world, and yet to remain hidden from the world”

– Charles Baudelaire, The Painter of Modern Life and Other Essays”

The concept of ‘the flâneur‘ is an old one that has recently entered my mind as my PhD research is starting to intersect conceptually with my artistic experiences within ancient city spaces. As someone who feels that you need to walk a city to really experience it, I also believe to really see a city, it helps to sketch it; not the whole thing, and not just its monuments, but small details and elements. The 19th century French symbol of the flâneur is relatable to me for that reason.

For the flâneur, one interacts within urban spaces through engagement (in painting or writing) and observation, but still remains apart- both a performer and spectator.  The lesser-known ‘flâneuse’ is the female chronicler of urban life in the 19th century, figures like Virgina Woolf, as discussed in this article, are part of the underespresented presence of female urban explorers. As a modern female explorer of ancient urban spaces, creating a space to discuss, share and engage with these ideas and locations in the public sphere is important to me.

Additionally, this concept resonates for me, as an archaeology student and artist, because it embodies more than a spirit of adventure and making art, but also a spirit of understanding and trying to piece together the urban landscapes that have developed and disappeared over time.

Since my first trip abroad, in 2002, the drive to sketch and take in everything that I could has formed an important part of appreciating a significantly bigger world than I knew. Sketches from my earlier books explored famous portraits and statues the likes of which I’d only ever seen in Art History courses.

This initial exposure provided me with access to masterpieces in galleries that were unlike the art I could see with any regularity in Canada. Sketching from paintings was a lot of fun and I felt so fortunate to see the images, but my first visit to archaeological sites in Greece and Italy really affected what I wanted to draw.

Visiting many sites in the Mediterranean over the last 10 years, I was able to sit and breathe in these ancient cities by focusing in on the shapes and forms of the stone,  lines of sight, and views between one temple to the streets or the valleys below. My curiosity directed me to explore artifacts and material culture that were used to adorn Greek, Etruscan or Roman buildings and the individuals who navigated through them.

The most inspiring pieces of art in the world were at my fingertips (sketchbook and pen tip), but my shyness about drawing in front of strangers took a few years to overcome. Ironically, the simple act of drawing in public would lead to some of the most interesting encounters with fellow travellers, curious children and tour groups. I have found the quiet study of the place you are in, or artifacts in front of you, signals something unspoken to other people which is inviting.

Over time I developed my own sense of style.  I could explore patterns and elements taken from brick designs, patterns of lace on Dutch merchant collars, hairstyles of Roman and Greek elite women, and not worry what the person hovering over my shoulder thought.

Much of what made this passion for drawing more appealing was the utility of having something free and enjoyable to do with the many hours you spend while traveling to get to the place you are going.  Waiting to cross the sea on a ferry or idle at a train station on my way to a new city, provided me a good amount of time to reflect on my sketches.

This reflection began to take greater shape and purpose once I started to do postgraduate research. Having questions and a focus of study in my mind affects the way I approach the ancient city spaces around me. It focuses my vision, but also encourages me to think on the connections between the visual elements across the Mediterranean. You don’t need to travel all over the Mediterranean to realise there is a shared visual culture being used with an incredible exchange of ideas and styles at play, but it was helpful to visualize the scope.

It began to create a tapestry of experiences (passive and active) in my mind of ancient art and the interconnectedness of ancient communities that had risen and fallen many centuries ago. I remain inspired to learn more and document it in a way that is meaningful to me and hopefully others. By saving a small piece of my experiences in a sketch or painting, I am starting to develop ways in which these small illuminations of incredible places and artifacts can be used to share the benefits of the study of Archaeology and Ancient History.

Thank you for checking out my blog! A bientôt! 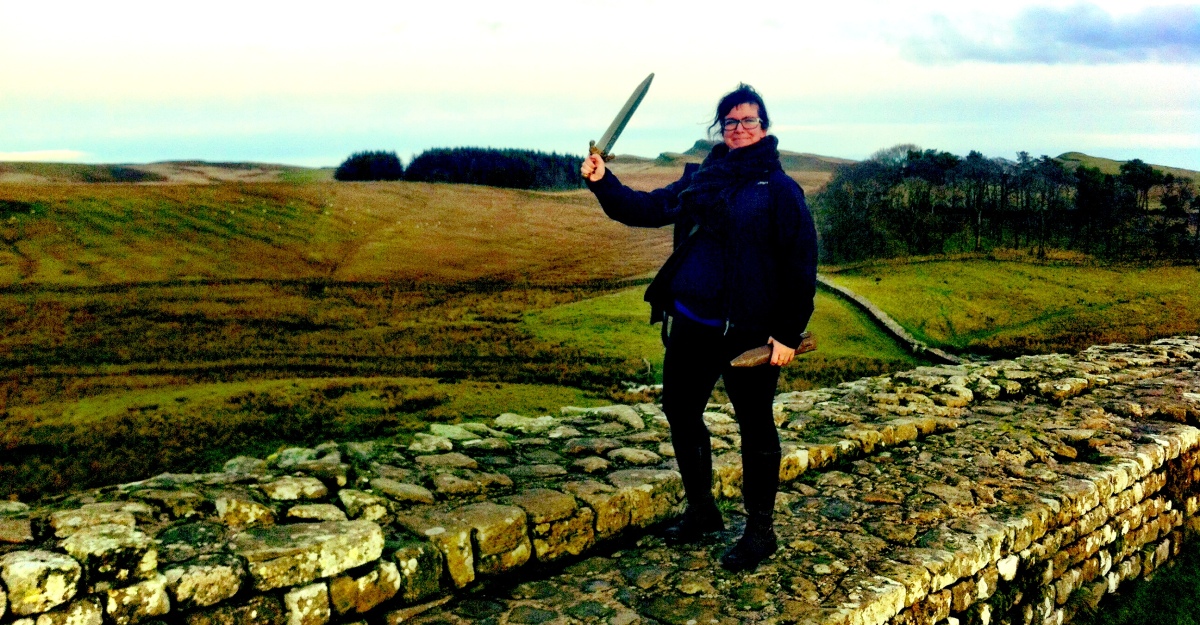 For the last few months I have taken a hiatus from writing my blog to focus on applying for a PhD at the University of St. Andrews. What a harrowing adventure! From start to finish, it was a good 3-month process with dozens of re-writes, stress and the agonizing wait to hear back. Even starting early, and following advice from friends and online, there were so many unknowns going into it. There were many moments of self-doubt, which had the uncanny ability to creep in when I needed it the least. With the support of some amazing teachers, mentors and friends, I managed to get someone interested in the incredibly nerdy stuff I love – Roman Aegyptiaca. In a post coming soon I will write about what that is, but for now…I will be studying Egyptian-looking things in Roman cities.

While the outcome might seem straightforward, (person X likes (topic), studies Y = goes on to PhD) the path is rarely as clear as this. An interesting part of the curation on social media, is all of the crap that you don’t want people to see can easily be ignored, not reported or underplayed. I focus and emphasize the things that I am most proud of, that arguably demonstrate a clear connection to my goals and objectives. It’s not always a conscious choice, but it excites me to share upcoming adventures (research trips, excavation work, conferences etc), and even if those activities are the exception to fairly humdrum periods of time, I try focus on the positive and engaging elements in my life. That curation presents a deceptively well-planned and linear pathway however.

Like many people in the ‘millennial’ category, I have taken a strange circuitous route to finding a path. For many years I was uncertain what it was I wanted to do, or how I would even get there. My professional or academic shortcomings would emerge when I contemplated pursuing any concrete direction. Supporting myself through school involved things that looked remarkably unrelated: Italian train information CSR, custom picture framer, freelance artist, call centre CSR, book and video store sales person, maternity store sales clerk, telecommunications CSR, office administrator for an engineering firm, work-study intern with a museum, housing assistant, university credit secretary, repairs assistant, catering delivery driver, and endless amounts of ‘exposure’ work (free) and side-hustle to get through.

Despite working in areas that for many would happily suffice as a career, I have always been half in and half out. Every work placement is an opportunity to learn useful skills, but nothing had any real resonance to me or inducement to stay long term. I always had an eye to what might be ahead and to apply to any and every opportunity, often ending comfortable employment for a scrambling uncertainty.

Sure, I love ancient history, archaeology and art…but what can I really do with all this?
Throughout all of that, I knew I wanted to spend my life studying and sharing aspects of ancient history through art and writing, but unsure as to what my mixed-bag of skills would allow me to do. When I drew all of my work experience, hobbies and passions together a picture emerged that put the question to rest: I want to be an educator of Ancient History. Fundamental to this was attaining a PhD, and getting more focused and industry specific work experience.

Having been accepted to St. Andrews, I now have several months to plan and prepare – skills my varied work experience has hammered into me. Much of the existential angst of ‘what will I do and where will I be next?’ can finally be put to rest for the next few years. With the patchwork of experience that has sustained me, now behind, I look forward with more clarity and focus.

👀👉🏼Have you checked out my most recent episode? Treat your ears: https://www.buzzsprout.com/1205618/9802812 🎧
📣NEW EPISODE 📣
Some silly times Christmas Day in Inverness where the cathedral cafe served up some lovely Christmas cheer for pups and their humans :)