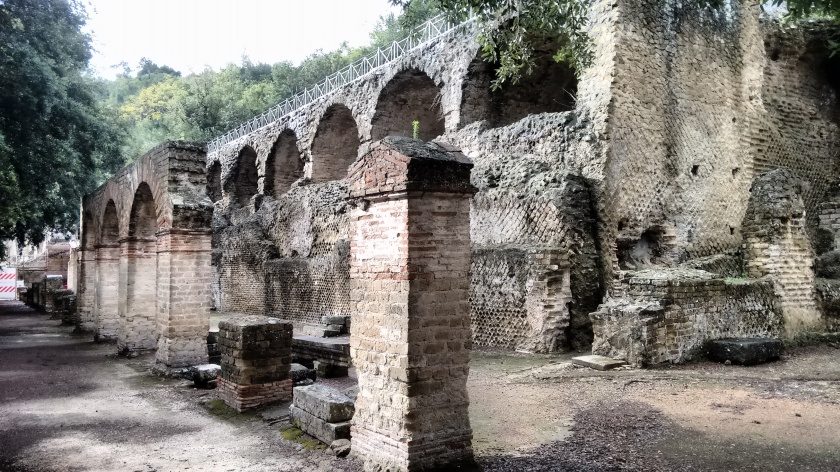 Whilst I was excavating in Policastro Bussentino, I decided to use my down-time productively and get to know the cities in southern Italy. The train routes were cheap and plentiful along the Tyrrhenian coastline, with beautiful views on this regional train ride from Napoli Centrale.

One such a day trip, I ventured from Naples on an ambitious outing to see some ancient cities of Magna Graecia. I say ambitious because by foot it is a very long walk from Baiae to Cumae along a winding hillside with no shoulder or footpath- all in all, a 15 mile walking day. 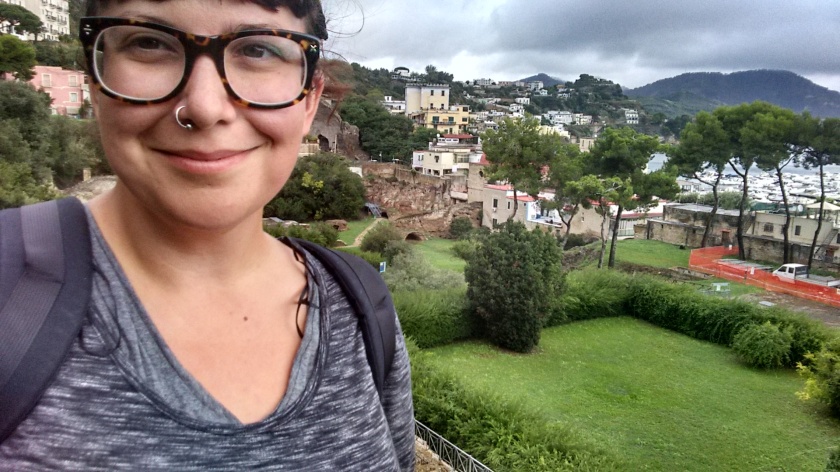 When I arrived at the ancient town of Baiae in Gulf of Puzzuoli, I had the unique experience of being in a spectacular archaeological site entirely alone.

It was a beautiful clear morning and I rocked up without having purchased a ticket (tickets you are supposed to buy at Cumae first then head over to Baiae, unbeknownst to me). Luckily, the park steward let me in for free and after I explained my disorientation!

The archaeological park was stunning, as you can see. The multi-story bath complex was built into the hillside, and standing atop the complex it is not hard to imagine why the super-rich of the Republican period into the Principate were drawn to this place. This area was rich in volcanic activity (Vesuvius is very close, of course) which the Roman architects and engineers were able to channel into sulphur springs – perfect for hot baths!

There seemed to be endless rooms, and many with mosaic floors still remaining in situ. The mosaics are, appropriately, water-themed with divinities and typical meander and wave patterns. Water and neglect have left them in the current state of disrepair they are in, but you can see evidence of the gorgeous technical ability.

A surprising amount of painted plaster was still visible as well, with typical decorative motifs and some strange ones. The frescoes date to two particular stylistic phases: the middle of the 1st century A.D., called the 3rd Pompeian style (notably because of the ‘Egyptianising’ features they possess. That stuff is my research jam, and I shall in due course dedicate many 1’s and 0’s of the internets to discuss it.
Below I’ve tried to highlight the figures which have zoomorphic features and elements meant to evoke Egypt (costumes and symbols).

A later, 2nd century A.D. phase is also present, which could be viewed as slightly irregular and a bit shabbier in execution. This little green dragon below was part of that later design.

Temples, Pools or …?
There were a few cisterns still, and one was even fully intact. The echo inside made singing sound like I was using a microphone. Yes, I sang a few Disney songs before giving my spot to the tourists who were waiting at this point, bemused, outside. Nothing like being in a archaeological sites for belting out tunes (Florence and the Machine). Amusingly, it wasn’t until a month later I learned the name of it was called the “Temple of the Echo“. While not a temple, the name was still pretty on point.

The ‘Temple of Diana’ that lay just outside of the archaeological park is a husk of its former self, but still pretty damn impressive.

This was built during the reign of Hadrian, one of the greatest building emperors of the Roman Empire. The influx of funds in the 2nd century A.D. – which manifested earlier in the frescoes being added to – coincides with the building of this structure. Called a temple erroneously, it has been argued to be a pool, a further spectacular addition to the bathing complex. As I neared the bottom of the hillside, I could see a MASSIVE temple-looking structure, across the (modern) street, outside of the bath complex. I stood to sketch it for a while, and saw that it was a ‘Temple of Venus‘, which, given the history of this elite spa-town, would have made perfect sense.

Prolific in his building, this massive Hadrianic era building could have been a casino, pool, or possibly religious building- all suggestions I read at the site. The lingering naming of the building, ‘Temple of Venus’ betrays the varying perceptions of it that carried on over the last thousand years since it was in use.The political landscape in Rome during the late Republic into the Principate involved the elevation of the Julio-Claudians and funding to their parton deity- Venus. Julius Caesar had a villa in the area, and other notables like Pompey Magnus, Caligula and Septimus Severus all frequented the area.

Augustus (nephew to Julius, nee Octavian) took over the entire complex (and much of the town), adding it to his sizeable imperial property. Controlling where the rich went to relax, socialise and play was pretty much Augustus’ raison d’etre during his early formation of how the empire would be run.
Anyone watching the Versailles (2015) series right now could imagine the same processes occurring in Rome under Octavian as was happening in the court of Louis XIV. Like the French nobles who were forced to adopt new practices and behaviours, Rome’s elite probably required some wrangling to stay in the lines as Augustus delineated them.  Controlling spaces goes a long way towards controlling behaviours and shaping ideas.

The analogy of Versailles can be taken farther, as Baiae developed a reputation  for moral bankruptcy, with salacious and scandalous behaviour taking place in the steamy rooms of this wellness retreat. One commentator on the depravity of Baiae’s baths and wellness centre was Seneca the Younger, describing it as a “vortex of luxury” and amusingly, “harbor of vice”. I suspect he may not have been on the guest list for the sexier parties.With Romans, physical wellness was linked with spiritual wellness. The presence of temples in a site like this would make a lot of sense.

A  significant part of the blue-bloodedness of Julius Caesar, and thus his descendants, was his claim of being related to the divine being Venus (through Aeneas, of Trojan war and founding Rome fame). He is a big deal in mythology, and would have been in the eyes of the Roman people. To claim mythical descent through him to Venus, the Julians linked themselves to the divine.It would be very appropriate then to have a bloody great big temple in this playground of the wealthy with their patron deity stamped allover it. When sacrifices and homages were being paid to that divinity, the connection to the Imperial family couldn’t have been far from the person’s mind.

Not surprising then, that as time and memory faded the original meaning of these buildings more mundane structures, nestled along the coast, took on impressive religious connotations.

Thank you for checking out my blog!
Ciao !