The special place Athens held in the minds of the Romans, due to their history and influence in the Mediterranean, was significant. But more broadly, it was the artistic, scientific and cultural accomplishments of the Hellenic people which the Romans were ravenous for.

Building designs, architectural elements, literary styles (poetry and playwriting) and painting techniques, were all introduced to Romans after several having enslaved and looted the Greek cities of Corinth and Epeiros. The goods were paraded in long processions into the city of Rome exposed many for the first time to the finer things Greek culture had to offer.

The legacy of this influx of Greek art into the Roman landscape and cultural sphere meant that those wealthy enough to possess these items were also possessed by them. The drive to collect, copy and emulate the high art of Greece was strong. As with art, literary and other cultural trends were brought in and filtered up the social hierarchy of Rome.

As Rome took over politically and militarily, they brought in droves of Greeks into the capital city, though most initially were slaves. These slaves could be highly educated teachers, artisans, courtesans, writers and labourers. Fashionable aristocratic households increasingly required high-quality Greek tutors for their children, which would obviously influence the tastes of their students. Eventually, we end at a point where the Roman elite were importing tutors from Greece to educate their sons and daughters in the language, philosophical and rhetorical practices.

The impact of Roman tastes in art can be seen in the photos above and below. A topic unto itself, is the Roman art trade – something which I am very interested in! However, as an example of what it actually meant to have a powerful empire capture and integrate Greek art and ideas into their own is highlighted through these works. As Italian families grew wealthier through empire building, they could afford the purchase of fine works of Greek provenance, or an Italian-made replica. The above examples, cargo from shipwrecks, illustrate the ocasional hazard of transportation.

Even in their fractured states below, the Roman copies show an exquisite attention to detail and rendering of Greek styles. The costs for commissioning works such as these and their transport must have been a sizeable investment!

As mentioned in the previous post, Greeks in Rome could achieve incredibly high status and impact the values and development of future emperors. One such student was the Emperor Hadrian. Educated in the literary traditions of Greece, with notable emphasis on the visual arts, Hadrian was exposed to an appreciation of Greek culture which resulted in exquisite building projects we can see today.

The influence of the ‘Romance of Athens’ on Hadrian, can be seen in his politics and building programme. Hadrian instituted a Panhellenion, and made Athens the capital city of this assembly of the Greek city-states, under Roman rule. This assembly was perhaps an attempt to hearken back to the period of a unified Greece emblematic of the 5th century BCE, their classical heyday. For political expedience and cohesion this move makes sense, but there is also an element of romanticising or idealising the Classical period of Greece by Hadrian, the philhellene (lover of Greekness).

The emphasis of Roman investment into the architectural landscape of Greece had a political motivation behind it. The Romans were basically carrying on the policy of Hellenistic eugeritism.

Having control over powerful former empires and influential cities enriched Rome’s cultural and political capital. Affixing their brand, sometimes directly over-top of a pre-existing architectural and social spaces in this ancient city, allowed them to write themselves into the history of Greece – a history which no one could deny was impressive and marked the most important events in the collective consciousness, often blurring between myth and reality.

Temple of Olympian Zeus (the Olympieion)

I have been lucky enough to have a few encounters with this temple, and it never fails to impress. The massive and intricate Corinthian capitals and fluted columns are familiar examples of what people expect when they go to archaeological sites of the Mediterranean. However, these columns speak to the Roman habit of embeddingtheir brand on to the architectural landscape of Greece as it linked itself into the story of pre-democratic Athens.

The temple was built on the foundations of a pre-existing sacred outdoor sanctuary and temple to Zeus. The previous temple structure, built in around 520 BCE by the tyrant co-rulers of Athens, Hippias and Hipparchus, had commissioned a more monumental temple than had existed previously under their father, Peisistratus. They demolished their father’s temple, and set to the task of building a more magnificent temple.

However, their lofty building programme would remain unfinished. The young tyrants were ousted after a salacious and political scandal turned Athenian sentiment against them. In a series of ‘Telemondo’-esque unrequited love triangle developments, Hipparchus coveted Harmodius, who was already Aristogeiton’s lover. Insinuations and insults abounded on all sides, leading to the two lovers murdering Harmodius and later being killed themselves. Hippias was ultimately overthrown in a Spartan-supported coup, and made way for the democratic government in Athens to take shape.

Simply fascinating narrative, you may say. Well, this series of events and all of the moral meaning read into it over time influenced how closely linked the sacred space was with these shameful tyrants. Thucydides and Aristotle discuss these events, with the impression that such massive building projects are vainglorious and lead in turn to loss of fortune and hubris.

Hubris, which brings us to the next phase of the history of this temple – the Olympieion. Whilst Hadrian set to work in the 120s CE on rebuilding the supermassive temple to Olympian Zeus, which was completed and dedicated in 131 CE. Hadrian, who at times was believed to call himself ‘Olympian’ had an altar to himself installed here as well.

Leads on to wonder who precisely was being worshiped here?

The Arch of Hadrian
This arch is not the triumphal sort you see in Rome, where the Emperor or senate would commission for the arch for an impressive military victory, but rather, this arch was an honorific from the Panhellenes or the Athenians themselves. 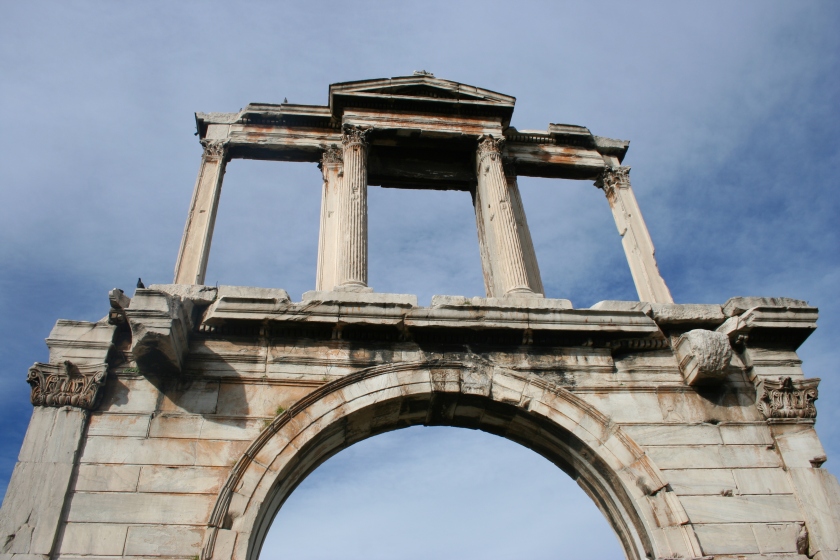 Situated next to the Olympeion, the Arch of Hadrian has quite a few stylistically complex elements and details which are exemplary of Athenian architecture done in a Roman-style. Created from solid Pentelic marble,  Corinthian capitals atop pilasters among other features, are representative of architectural imagery in Roman wall painting. There were sculptures in the central niche, it has been suggested, which were of Hadrian and Theseus. This is not such an odd paring when you consider the inscriptions.

The inscription towards the Acropolis (below) states “This is Athens, the ancient city of Theseus”, who was part of the mythical founding. The other side facing the Olympeion reads, “This is the city of Hadrian, and not of Theseus”. These inscriptions denoted the physical and symbolic relationships of the Athenians; their glorious mythical past and their Roman present were delineated by this liminal space.
This, like other examples of eugeritism (benefaction), is how the reciprocal relationship worked. It was expected that they offer honours to Hadrian in this fashion, but that did not necessarily mean everyone was happy with the Romans having control in Greece. 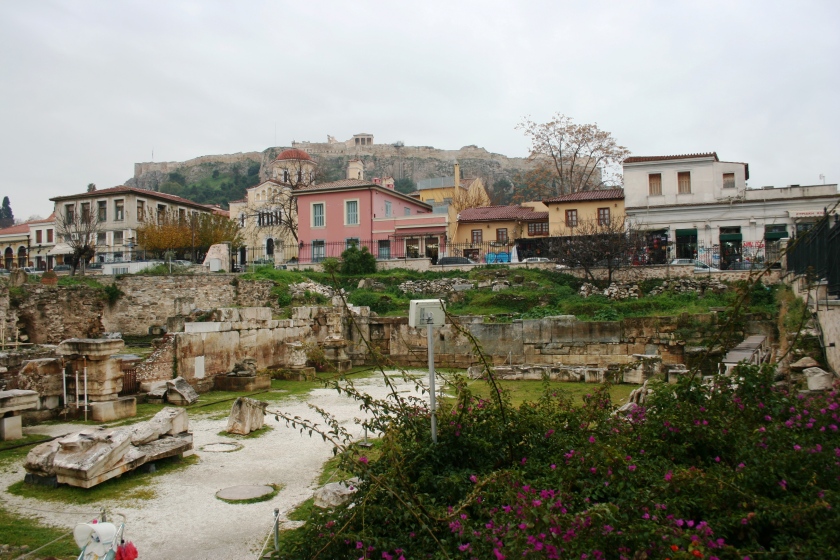 Situated in the Roman Agora, on the north-slope below the Acropolis, Hadrian’s library would have been a richly decorated and comfortable centre of intellectual pursuits. The great classics of Athenian theatre were housed in this, perhaps the greatest, of Hadrianic homages to the city that he loved so much.

The artistic elements that still remain betray Hadrian`s tendency to construct archaising monuments. A mixture of Pentelic marble, and Karystos marble and was comprised of many rooms – one of the most luxurious buildings in Athens. It may be hard to imagine given the images you see, but this ruin held gilded ceilings, painted walls, statues and a hundred columns of Phrygian marble according to the Pausanias.

The complex overall had decorative features and spaces for elite academic pursuits. Perhaps Hadrian wanted to re-invest in Athens, renew it as the cultural and intellectual capital of the Mediterranean, supplanting the position which Alexandria had held for centuries with its Great Library.

Tower of the Winds 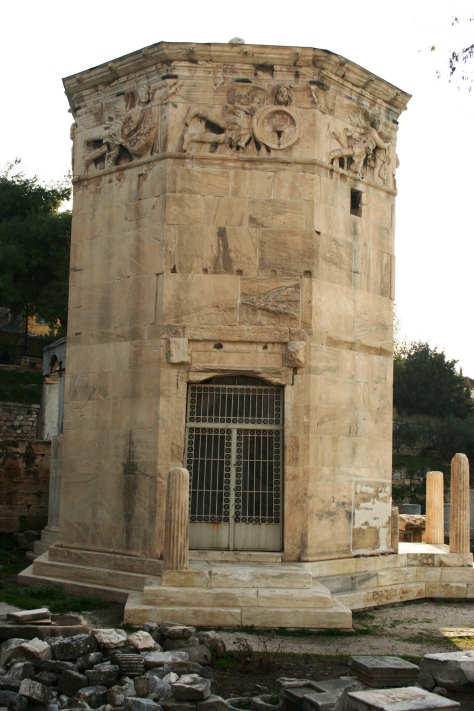 One of the key buildings in the Roman Agora of Athens, which continues to impress tourists on the north side of the Acropolis, is the Tower of the Winds. As with the other buildings in Athens, it was built of that familiar Pentelic marble into a twelve-meter high clock tower. The building had just been restored with the scaffolding removed before I arrived, which was excellent timing to see a very ornate and beautiful ‘horologion’, or timepiece.

The building we see today, as in all things, is not complete. In antiquity, it would have been topped with a bronze (possibly) weathervane of Triton that would tell a passerby the direction the wind was blowing. If this seems irrelevant to modern viewers, we should always try to take into account that every piece of technology available at the time was as good as could be hoped for. In the seafaring culture of the Hellenes (Greeks), any advantage or extra measures taken for the weather and time was a useful tool.

The Roman Agora shows another product of the Italic investment in the city of Athens. Marking the entrance to the west of the Agora, it bears a dedication to ‘Athena the Originator’, not unlike the other monuments in Athens. However, the Roman gifted through the generosity of Julius Caesar and his son, the Emperor Caesar Augustus. 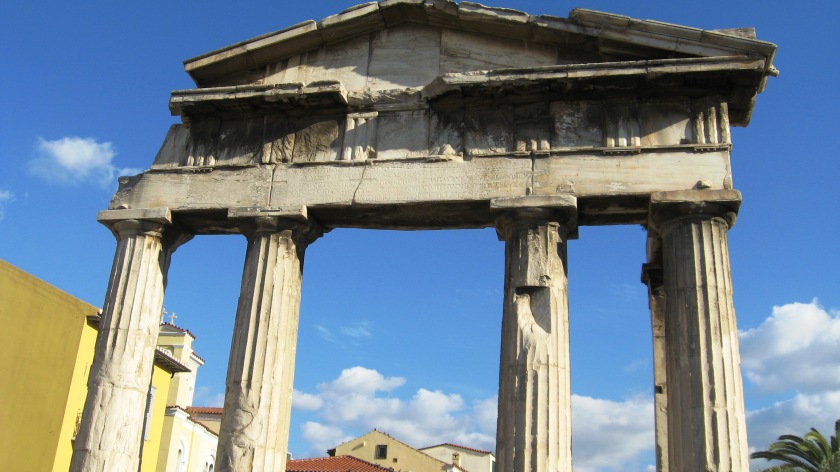 Indulging me for a moment, let’s unpack that inscription. Augustus’ ascension followed Julius Caesar’s death, a surprise adoption, which ultimately led to Augustus’ years’ long civil war to wrestle control over the Roman Republic. As Augustus defeated his competitors, Mark Anthony and Cleopatra, and thousands of Italian dead from both sides of the conflict, he sought to rebuild and polish his image. Further discussion about the impact and persona of Emperor Augustus will follow, but for now, you can rightly imagine, feelings were mixed among the survivors of the war and the purges which followed. Families loyal to the losing side were eliminated and embraced dependent upon their willingness to acquiesce to Augustus.

Part of the importance of smoothing over relations rested in the image he tried to sell, was to gain legitimacy.

Thank you for checking out my post!
Feel free to leave comments, messages or questions.