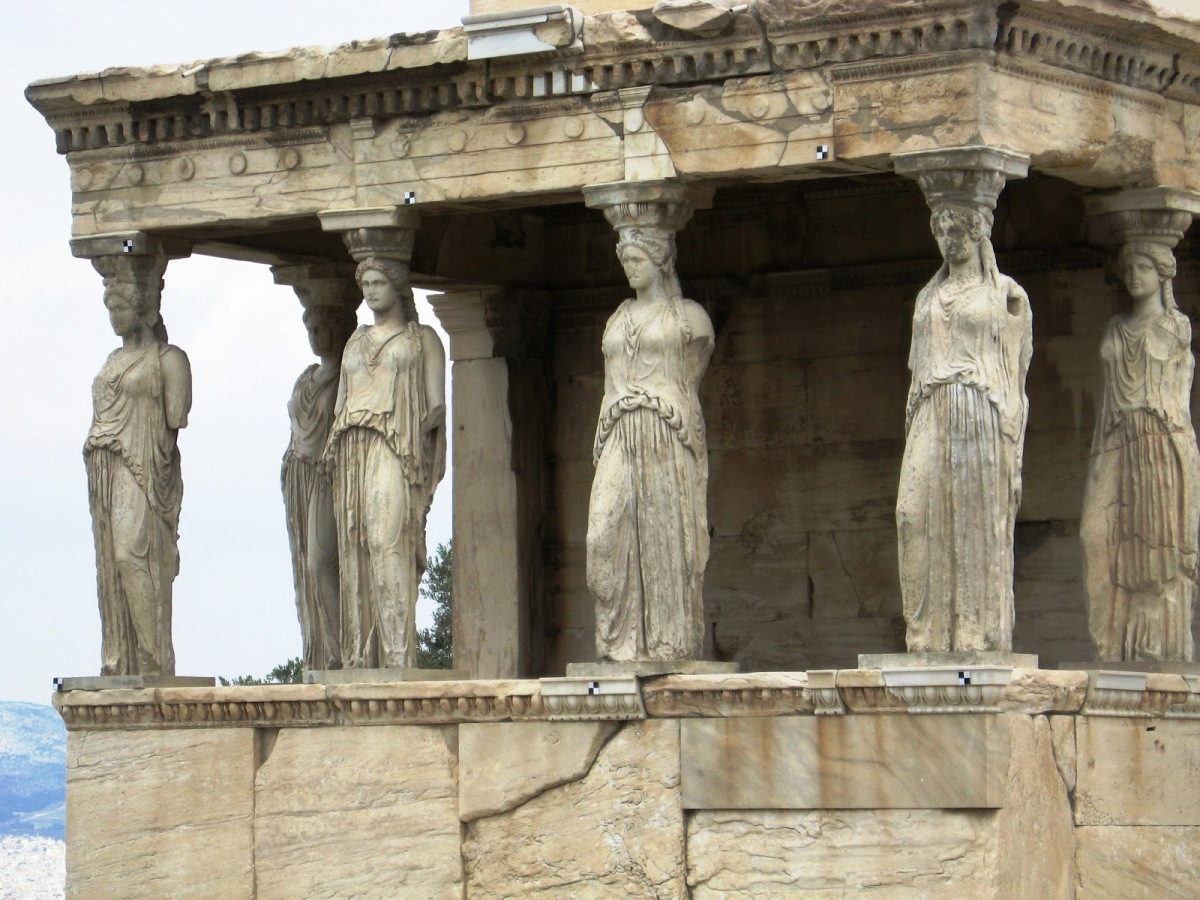 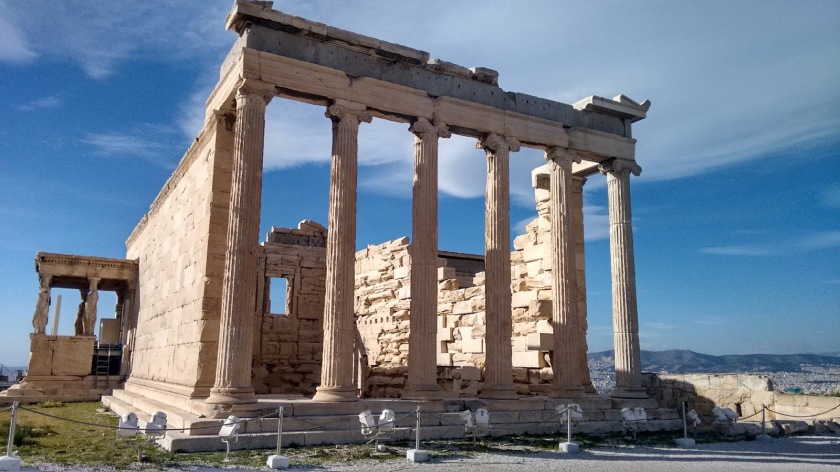 The story of the Erechtheion was one of constant change. Built to replace the Old Temple of Athena, though not atop its foundations, it accommodated several cults in the same space. The building’s namesake was the hero and foster-child of Athena, Erechtheus. The temple was also dedicated to Athena, Poseidon, Hephaistos, and the hero Boutes – all worshiped in the same space.

If you have been counting along, that is now three temples to Athena on the Acropolis.

This temple offers an interesting glimpse at what was going on in Athens as it was building an empire. Pericles and other elites of Athensbrought together a mixture of local spaces routed heavily in the foundation mythology of the city and it’s heroes, and built up expensive, impressive buildings around them. 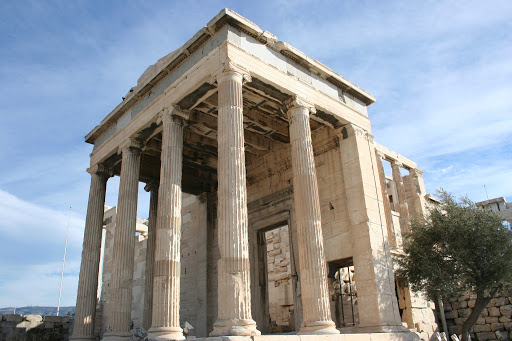 The temple is on a slope (as you can see above) which sees the west and north side three metreslower than the southeast portion of the temple.The building size was reduced as a result of the shortage in funds during the Peloponnesian War, and the Caryatids placement hid the change in design. 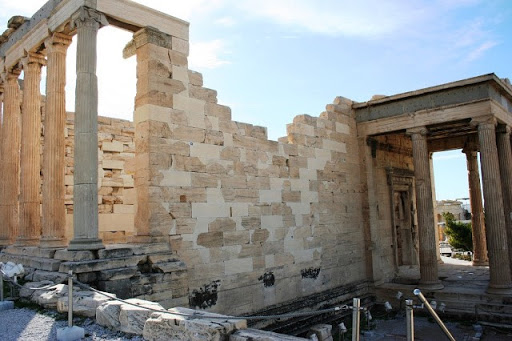 The architectural features of the building are really quite unique, in beauty and creativity Phidias out-did himself. The decoration programme included gilded ornamental work, inset glass beads and bronze work. The design incorporated multiple levels, sections and marbles. 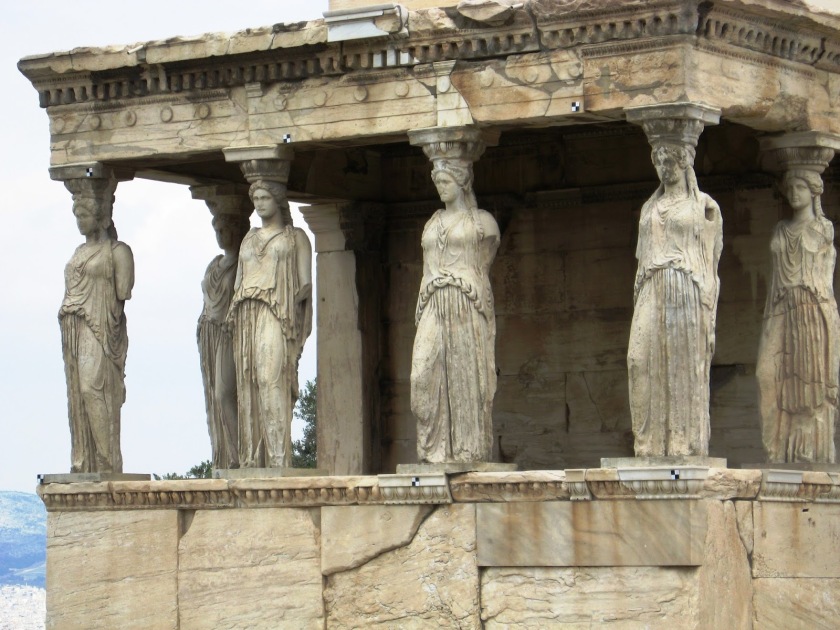 The frieze (not visible) which was made of dark Eleusinian limestone and the temple was constructed from Pantelic marble. The frieze’s subject matter is unknown, but an inscription recorded payments to the tradesmen who carried out the work. 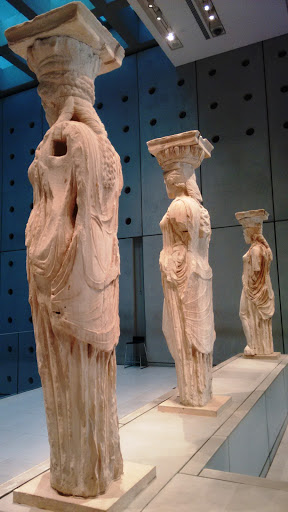 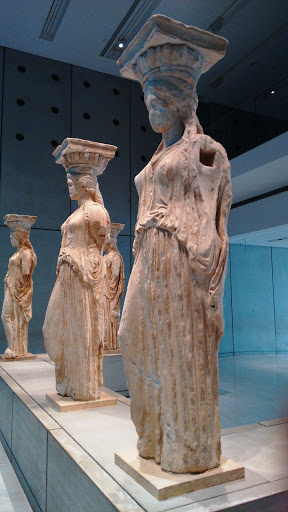 The female figures which line the porch are called Caryatids. Though made most famous by their presence on the Erechtheion, Caryatids had been an architectural feature in other sacred sites in Greece; during the Archaic period there were possibly other buildings with standing female columns, most notably in Delphi. These Ionic columns carved to look like young women is pretty spectacular by anyone’s standards. The original Caryatids have been moved and restored, using state of the art technology, in the New Acropolis Museum. For quite some time they had been under restoration, but you could view the work being carried out. While visiting in 2016, I was able to walk right up to them (which you cannot do with the replicas), and they were stunning.

This cultic complex is an interesting oddity. It drew together many aspects that Athenians could use to define themselves; their foundation myths involved gods and local heroes, and all were represented within the Erechtheion.It was created in the period which followed ahistoric clash of cultures between the Persians and Greeks,and throughout the period of its creation the growing city-state of Athens developed into the imperial power it would belauded as for the next two thousand years.