The last 12 months have been eventful, with a lot of life changing things on the horizon to be excited about. In a few short days, I will be heading off for a third (more lengthy) season in the Roman town of Aeclanum, (near modern Mirabella Eclano, Italy). The last year was incredibly formative for me, as I was privileged enough to work on developing materials with the site directors of Aeclanum from the University of Edinburgh and the Apolline Project for public outreach for the Open Day, as well as ongoing learning materials for children to engage with archaeology in schools.The opportunities to share this work are blooming into new areas for me professionally with a lot of creative directions to pursue.

Ten years ago, before I knew what I wanted to with my life, I applied for the opportunity to work on a three-month salvage excavation in Poros, Kefalonia. This excavation was organised in collaboration with Simon Fraser University and the Ephorate in Kefalonia. One family in Poros, the Metaxas family, made an incredible impact on my time there. They were strong advocates for this dig, working with the local government to see that the archaeological site was excavated before it was robbed or destroyed once it became apparent that there were tombs located there.

It was a project born out of a local passion with an aim to start documenting and publishing the rich history of the area, which had been under occasional excavation for decades with very little making it into the public record. By the time of our arrival, there was evidence of looting, so speed was of the essence and the local archaeologists worked with a ragtag bunch of undergrads to excavate and document the human remains and small finds.

The scientific processes are the same for a salvage dig as a normal one, but the elements that are the focus of the excavation tend to be revealed and in peril, so acting quickly and documenting as much as possible is the priority. Our team worked on the excavation during the day and in the evenings would have classroom time and readings, even the odd Greek lessons. Even on the rainy days where the schedule entailed 8 hours of pottery washing, it was still brilliant to be part of. 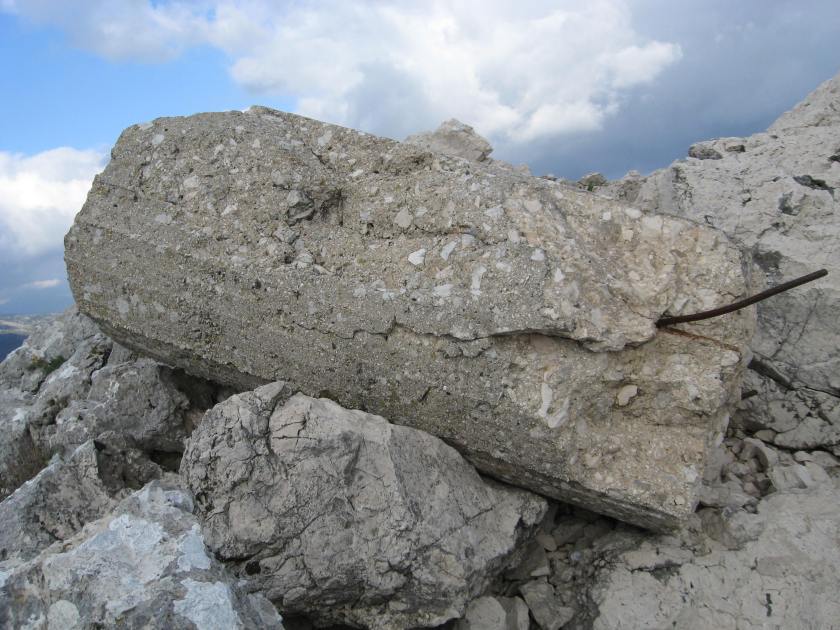 The antiquity of the necropolis was evidenced through artefacts which represented multi-period usage on the site for burials, an ancient garbage dump (large amounts of broken pottery and animal bones), and fluted columns and  architectural blocks from some unidentified building structure.

The excavation work was productive for getting the half-exposed burials out in time before the winter rains began to set in, though occasionally, flash rainstorms would flood the side of the mountain with us on it.

The pithoi were interesting tomb-types that were repurposed from containers for bulk storage of grains or other items to a burial container. Once the ceramic vessel was broken up, a body was interred in a flexed or crouched position, and grave goods were added. The vessel was placed around them with fill, but could be accessed again, if another body was to be added to the burial at a later date. 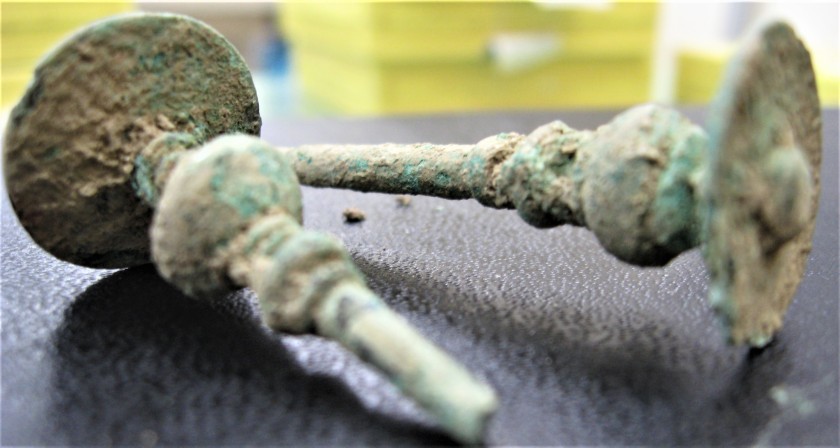 The status of the publication of the finds from the dig is unknown to me, so to avoid getting in trouble, I have made a few artistic renderings of some of the standout artefacts:

From atop the hill we excavated the necropolis, you could see across the valley with stunning views inland and out to the sea. Putting myself in someone’s sandals from 2,500 years ago and looking out across the same seas they did was a moving experience. Having studied Humanities texts and Art History prepared me in a large way for I was able to see how much more I need to understand before the study of Archaeology or Ancient History. Linking this site in my mind to the Homeric kings and events from the Iliad and Odyssey was only natural, since it was on our reading list, but the chronology of the material culture certainly aided the visualizing of the Bronze Age culture.

The antiquity and long habitation of the region was visible in another area, Tzanata, 3 km east of Poros in the Eleios-Pronnoi municipal region, which had a preserved tholos tomb, or ‘beehive tomb’. 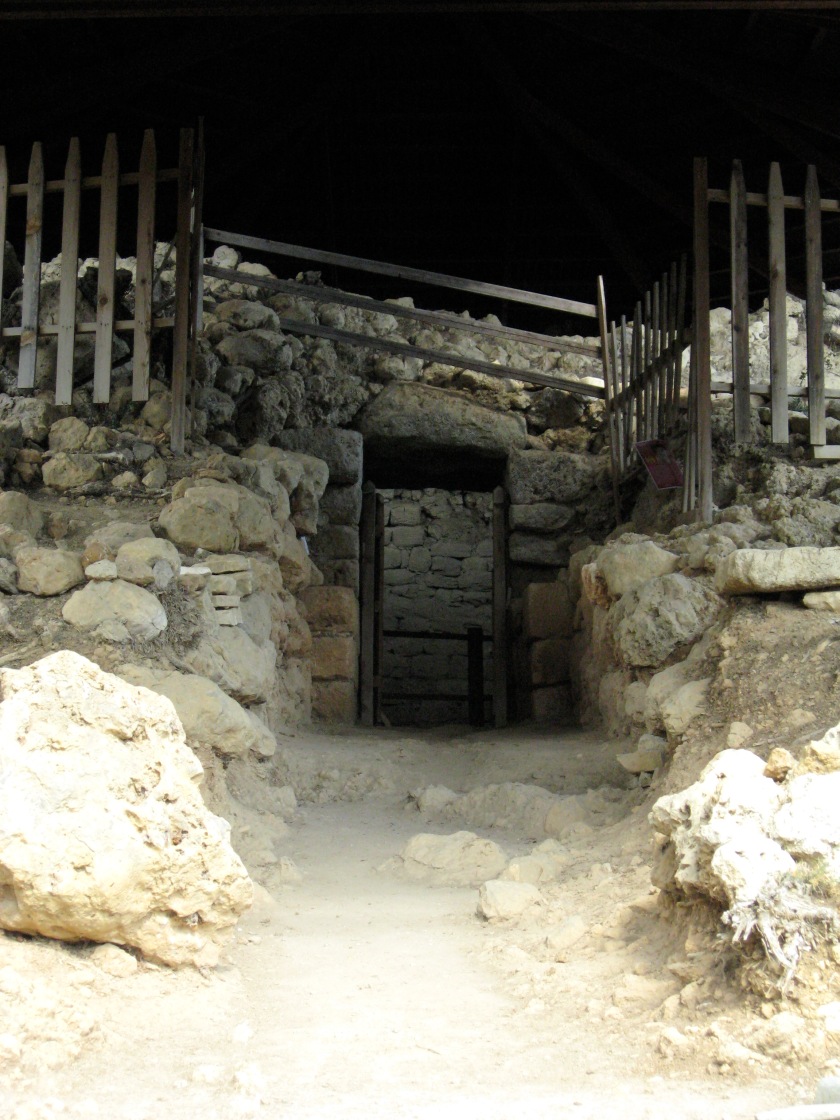 This type of tomb has a dome-shaped chamber (like a beehive cut in half), an entrance passage (dromos) and a doorway (stomion) covered with 1-3 lintel blocks. These monumental structures would be buried underground, though accessible, as there could be multiple burials over long periods of time.

The nearby environs of Poros were home to a Bronze Age tholos tomb, which has been dated to around 1400 BCE. This tomb, excavated by Lazaros Kolonas in 1991, contained several sequential burials that could suggest a common lineage.

While significantly smaller than the most famous tholos tombs of Mycenae, it certainly showed comparable architectural features and represented elite participation in the monumental funerary building of the Bronze Age Mediterranean. Finds in the archaeological museum of Argostoli (temporarily closed) reveal golden grave goods from the Mycenaean cultural influence. Included in these finds were carved gemstones a seal that has been interpreted as ‘royal’ were discovered in the tomb.

The proximity to Pylos, among other Bronze Age kingdoms of the area, provide parallels chronologically for local elites of Pronnoi having a similar kind of rule over the area by virtue of using similar funerary cultural practices. However, little is known of this site as the excavation reports remain (I believe) unpublished. If further work has been done on this site, it would open up a lot of interesting questions about the position of Kefalonia within Bronze Age trade and indeed, later into the Classical period.

Suffice it to say, my time spent in Poros, Kefalonia, was fundamental in shaping the direction of my studies and career plans. While I have not been back since 2008, the richness in history, the warmth of the community and beauty of the island is still deeply felt. I am making plans to return and investigate the current findings of the area and reunite with the incredible people who made it such a memorable experience for me.

One thought on “21.Excavating in Kefalonia: searching for Bronze Age heroes”